Get On Your Knees

Comedian Jacqueline Novak’s GET ON YOUR KNEES is the most high-brow show about blow jobs you’ll ever see. Novak spins her material on the femininity of the penis and the stoicism of the vulva into an unexpectedly philosophical show that’s part feminist outcry, part coming-of-age tale of triumph. Ira Glass calls it a “nearly Talmudic dissection of a subject. Really funny and just really like nothing else."

“Jacqueline Novak’s GET ON YOUR KNEES is the cornerstone of #NSFW. Jacqueline is a rising star who pokes at the often tricky relationship women have with their bodies and their sexuality, with a forensic and funny analysis of a supposed rite of passage with a certain male body part. Jacqueline is a fearless, intelligent, and powerfully subversive performer - a true Woolly artist.” 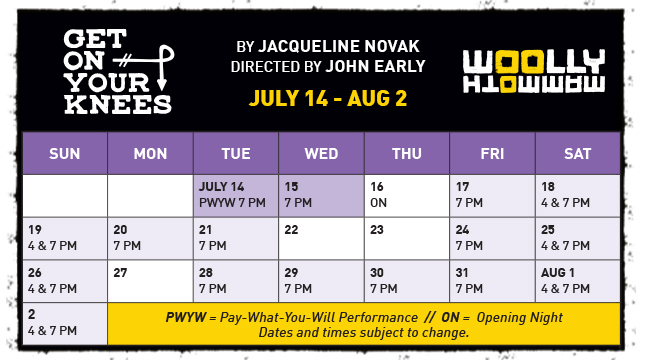 "Ladies and Gentlemen, I have seen the Muhammed Ali of comedy."

"Critic's Pick! Brilliant on the absurdity of having and being a thinking, feeling, desiring, body. Shrewd, explicit, though not exactly raunchy, this is the funniest show about Cartesian dualism you will see all year!"

"I felt my teenage self seen and heard. I hope a lot of young women, older women, young men, older men, and also non-binary peeps of all ages see this show because it is funny and healing."