Audiences are welcome to join a series of post-show talkbacks for A Strange Loop. Throughout the run, this will be a space to reflect, connect, and build community together, alongside the cast of A Strange Loop and Woolly staff.

A STRANGE LOOP IN-PERSON EVENTS:
CONNECT WITH THE CAST

LOCATION: In the Theatre

Immediately following the performance, join the cast of A STRANGE LOOP for a series of post-show discussions.

A CULTURAL & HISTORICAL LOOP: ‘ROUND D.C.’S BLACK BROADWAY ON U 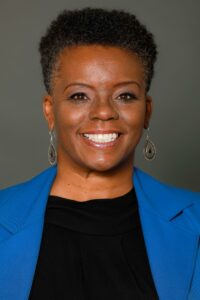 Shellée M. Haynesworth, Indigo Creative Works
Throughout her 20+ year career as an independent producer, writer, and director, Emmy award-winner Shellée M. Haynesworth has told stories that examine the African Diaspora and shed light on the trailblazing contributions of African Americans and Latinos in history, arts, culture, and humanities. Some of her multimedia credits include Fierceness Served! The ENIKAlley Coffeehouse, Latino Voices: Art & Culture (PBS/Smithsonian), Latino Music Greats, The HistoryMakers: An Evening with Quincy Jones (PBS), and Women’s Land Rights: A Ripple Effect (USAID/Gates Foundation), among others. Discover these stories at: www.indigocreativeworks.com. Shellee is an active member of the Producers Guild of America, Women in Film and Video (WIFV), and currently serves on WIFV’s Advisory Board. She is a University of Maryland at College Park alum, where she earned a B.S. in Broadcast Journalism.

A CULTURAL & HISTORICAL LOOP: ‘ROUND D.C.’S BLACK BROADWAY ON U

On its way to Broadway, A Strange Loop has arrived at Woolly. Before the Harlem Renaissance, the Black arts and culture movement thrived on D.C.’s U Street’s later known as “Black Broadway.”

This exhibit showcases the Black joy, Black life, Black pride, and Black power found in D.C.’s historic “Black  Broadway” along U Street, despite the oppressive laws of the Jim Crow era.  From the 1920s-1950s, Black venues including the neighborhood’s unsegregated concert halls, lively nightclubs, and luminary theatres hosted round-the-clock and afterhours performances. Take a “loop” around this storied neighborhood, and bear witness to Black U Street’s community elders and stakeholders.

Black Broadway on U Project  | www.blackbroadwayonu.com

Launched in February 2014 by award-winning multimedia maker, storyteller, and culture keeper Shellée M. Haynesworth, a multigenerational Washingtonian, the Black Broadway on U Project preserves the under-told history of D.C.’s Black U Street corridor when it was known as “Black Broadway” from the 1900s – 1950s. Shellée is very passionate about sharing the story of Black U Street, which was an important cornerstone for her family in the early 20th century. Through the use of digital and social media content, an interactive website, oral histories, pop-up exhibits, virtual mapping and more, the aim of this project is to create a transmedia archive of this historical moment and its transformative impact on the people, community, and culture of Washington, DC as well as the nation as a whole.