ARTISTS RESPOND TO VIOLENCE in Society

A Reading and Discussion

Free and Open to the Public

Presented in association with THE STORY OF THE GUN

In a world in which headlines about civilian mass shootings and gun-related deaths have become all too frequent, we continue to grapple with the question of why these attacks happen and how we might stop them. Join us for an evening with artists who confront these complex issues head-on in their work, beginning with a reading of excerpts from People Respect Me Now by acclaimed Swedish playwright and director Paula Stenström Öhman, and directed by NJ Mitchell. Written in response to the Columbine tragedy by a dramatist with training in criminology, this piece explores issues of culpability, and asks: are these acts the result of male identities defined by aggression and violence, broken individuals and families, collapsing social safety nets, or something else entirely?

Following the reading, we will engage in a facilitated panel discussion with Paula Stenström Öhman, her American counterparts, and policy experts looking to shed light on this complex matter.

The reading, discussion, and Ms. Öhman’s visit to the U.S. is supported by the Embassy of Sweden in the USA and the Swedish Arts Council.

The event also marks the launch of the Theater and Policy Salon, which is designed to build a community of theatergoers who are passionate about policy and plays that speak to policy issues.

TICKETS ARE NOW SOLD OUT FOR THIS EVENT, HOWEVER BEGINNING AT 5:30PM ON THE DAY OF WE WILL HAVE A STANDBY LINE STARTING AT THE DOOR FOR THE SMITH/MELTON REHEARSAL HALL. IF TICKETS BECOME AVAILABLE WE WILL SEAT STANDBY PATRONS IN THEIR ORDER OF ARRIVAL.

"A masterful display of the art of theater" 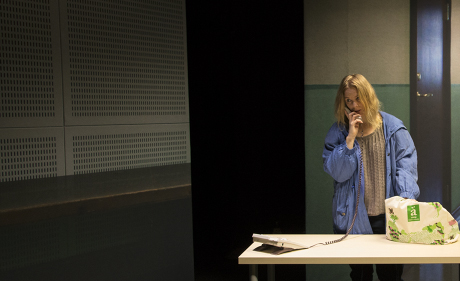 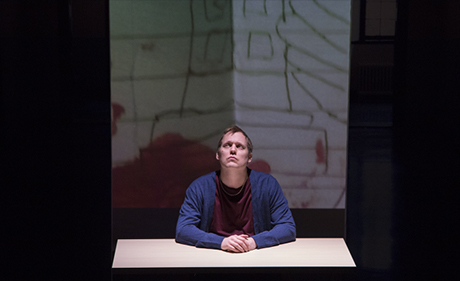 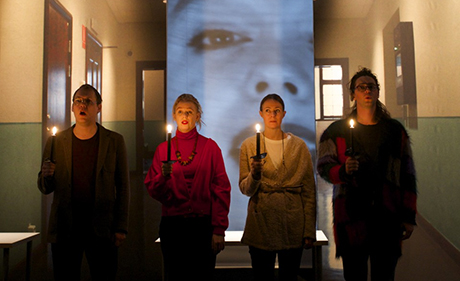 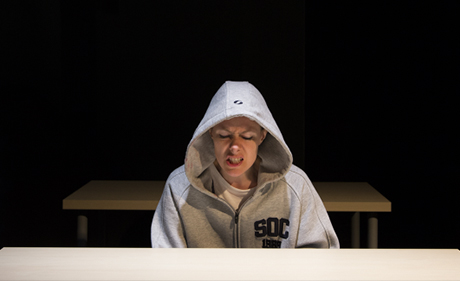 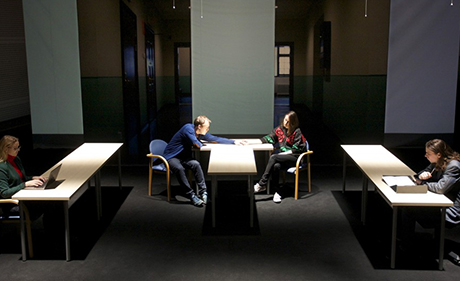 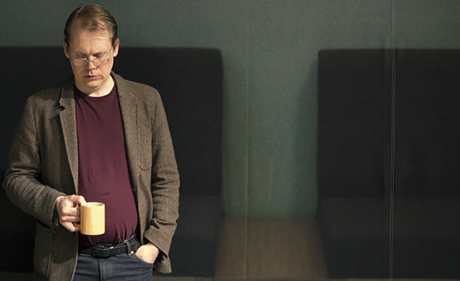 About the Playwright: Paula Stenström Öhman

PAULA STENSTRÖM ÖHMAN is a playwright and theater director who has run Lumor, a Stockholm-based theater company, since 2004. People Respect Me Now was selected as the best contemporary Swedish play by the International Theater Union and New Nordic Drama in 2016. She also received the Swedish Ibsen Prize in 2016.

She graduated with a degree in Social Anthropology, Political Science, History of Ideas from Stockholm University. She also did coursework at Stockholm University for a Master’s in Criminology. Her studies and research in criminology contributed to the development of People Respect Me Now.

Paula will direct the premiere of her new play The Best of Everything (Allt gott i världen) at the Gothenburg City Theater in September 2018. Her play Blue Air will be presented by Sweden’s national touring company Riksteatern.

About the Director: NJ Mitchell

NJ MITCHELL, Artistic Director at the Alliance for New Music-Theatre, strives to bring to the stage EduTainment performances intended to empower and emphasize equal human rights. She focuses on understanding how theater arts can give access to education and entertainment in ways that can change ideas towards a brighter solution. Learning from film, TV, commercials, billboards, and print - including the personal empowerment industry - are all experiences NJ finds critical to her directing fabric. Listening to community is so important to her directing that she is involved with ideas on theater boards, community and public programming committees, as well as serving as a panelist and facilitator of theater discussions. She is co-facilitator of Theater & Policy Salon (TPS) and founder of SALT, Social Justice & Art Lessons using Theater, and Blacks and Jewish Unity Poetry Slam productions. A theater performance can be utilized to inform, enlighten and teach us many possibilities of and ways to kindness toward one another.

MICHAEL FELDMAN (Co-Facilitator) of the Theater and Policy Salon (TPS) curates and moderates policy discussions that investigate themes raised by theatre and other art forms. He launched the Talk Tank series to explore policy issues underpinning plays in Forum Theatre's 2016-2017 season, and again organized Talk Tank discussions for Forum’s final 2017-2018 season. Michael served as an Editorial Team Member at Createquity–a virtual think tank and online publication–through its sunset in 2017. Michael is Principal at Transitions International and also serves as the board Director for Cultural Diplomacy of the Alliance for a New Music Theatre.

​​Michael is a former cultural attaché and diplomat whose experience bridges the arts, development, and public policy worlds. Michael was a director at PEPFAR, the President’s Emergency Fund for AIDS Relief; a director for Europe and Central Asia at the Office of the U.S. Trade Representative; and professional staff of the Budget Committee of the U.S. Senate as part of a fellowship with the American Political Science Association.

At the US State Department, Michael served in Europe and Central Africa; he oversaw assistance for the Balkans; and he negotiated policy with the Organization for Economic Cooperation and Development (OECD), the G-7/8 process, and the European Union. Michael graduated from Wesleyan University and speaks German, Czech, French and Italian.

AJMEL QUERESHI, Senior Counsel at LDF, specializes in cases concerning the discriminatory impact of policies and practices under Title VI and Title VII of the Civil Rights Act and the Fair Housing Act. Just months after joining LDF, Ajmel spearheaded the filing of a landmark federal complaint regarding the cancellation of the Baltimore Red Line. The filing was covered by and Ajmel was quoted in the Washington Post and the Guardian, among others. In addition to this work, he also represents prisoners facing a sentence of death, monitors the desegregation of school districts, and coordinates litigation and policy related to the school to prison pipeline. Most recently, he has challenged multiple attempts by the Trump Administration to rescind regulations that would increase access to fair housing. Ajmel’s work has been recognized by Harvard Law School, which awarded him a Wasserstein Fellowship in 2016.

Before joining LDF, Ajmel worked as Staff Counsel at the American Civil Liberties Union's National Prison Project, where he litigated complex class action claims involving the United States' most inhumane correctional facilities. He served as one of the lead counsel in Dockery v. Epps, challenging conditions at the East Mississippi Correctional Facility, and assisted in the representation of the Plaintiff class in Parsons v. Ryan, a statewide class action concerning the lack of health care and conditions of confinement in Arizona's prisons.

Ajmel previously co-directed the Civil Rights Clinic at Howard University School of Law, where he also taught courses in Torts and Federal Civil Rights. Under his direction, the Clinic filed amicus briefs in several cases before the United States Supreme Court, as well as in Fletcher v. Lamone, in which the United States District Court for the District of Maryland upheld the nation's first statewide law to prohibit prison-based gerrymandering. Prior to joining Howard Law School, Ajmel received a Skadden Fellowship and directed the Immigrants' Rights Project at the ACLU of Maryland. In that capacity, he argued before Maryland's highest court and regularly testified before the Maryland legislature. He currently serves on the ACLU of Maryland's Board of Directors.

Ajmel's editorial writings have appeared in various newspapers; he has published articles in several legal journals; and his cases have been featured by the New York Times, the Washington Post, and the Daily Show with Jon Stewart, among others. In 2010, the Maryland Daily Record named him one of the top legal professionals in Maryland under 40.

HOWARD SHALWITZ is the Co-Founder and Artistic Director of Woolly Mammoth. Under his leadership, Woolly has grown from a tiny alternative theater to one of the most influential creators of provocative new theatre in America. Howard was the recipient of the 2014 Margo Jones Award in recognition of his lifetime commitment to new American plays, and the 2012 Distinguished Finalist for the Zelda Fichandler Award for Outstanding Regional Director. He received the 2011 Helen Hayes Award for Outstanding Director for Clybourne Park, and was nominated in 2014 for Stupid Fucking Bird. He has appeared on the Woolly stage in The Arsonists, Full Circle, The Gigli Concert, Lenny & Lou, and many other plays. In recent seasons, he directed the Woolly premieres of Zombie: The American, Civilization, Fever/Dream, and other innovative new works. Howard has acted and directed for leading American companies including New York Theatre Workshop, Playwrights Horizons, Arena Stage, Buffalo Studio Arena, Soho Rep, Syracuse Stage, and Milwaukee Rep. A native of Buffalo, NY, he received his BA in Philosophy from Wesleyan University and his MA in Teaching from Brown University before launching his career as an actor and director in 1976.

HENRY BARATZ appeared in the title role in The Little Prince Washington National Opera, Ragtime at Ford’s Theatre, The Secret Garden at Shakespeare Theatre Company, Carousel at Olney Theatre Center, and in Elmer Gantry at Signature Theatre as the understudy for Young Man. He appeared in several productions with Young Artists of America. He was also a Company Member in Pre-Professional Program Adventure Theatre MTC 2013-2016. He is an Equity Membership Candidate/AGMA Member.

ROBERT HAMILTON has performed and produced plays around the DMV for the past 5 years. His most favorite works in which he has performed include Restoration Stage's The Very Last Days of the First Colored Circus, Set It Off the Musical and Momentum Collective's UStreet the Musical. His favorite plays that he has built or designed are Ally Theatre's Rabbit Summer, Gala Hispanic Theatre's In the Heights, Studio Theatre's Remains, and Restoration Stage's Chocolate Covered Ants.

NOELLE C. ROBINSON has performed in Annie as Annie at Olney Theatre Center, in Hairspray as Lil Inez at Toby’s Dinner Theatre, and in A Christmas Carol at Ford’s Theatre.  She received a 2017 Helen Hayes Award Nomination for Outstanding Supporting Actress in a Musical for Hairspray.

BRITTANY NICOLE TIMMONS is a native of Washington, DC. She received her BFA in Professional Theatre-Acting from North Carolina A&T State University. AGGIE PRIDE!!!  Brittany is a host and panelist on DC's District Knowledge Network millennial-based talk show I Wish You Knew. She has had the pleasure of having a minor role in The Jenkins Brothers' Sundance Film Festival-recognized film Sinners Wanted. Brittany was last seen in Count Down at The Strand Theatre Company (Baltimore) and The Very Last Days of the First Colored Circus with Restoration Stage (DC).

Woolly is happy to offer caption services for the performance of The Story of the Gun on Saturday, August 4 at 3:00pm.
See all Related Events