Pick at least three shows from our upcoming season to build your own package and get Woolly exactly the way you want. Three-show subscriptions start at only $120!

Shipwreck: A History Play About 2017

People treat me like I’m a character in it, but this is a story I just stepped into unwittingly.

A group of well-meaning liberals gather at a farmhouse in upstate NY for a relaxing weekend. A son adopted from Kenya struggles to feel connected to his new family and country. And the 45th US President sends a history-altering dinner invitation.

There is plenty of blame to spare as snow piles high, mountains crumble, and the wounds of the 2016 election break open. The mythology of America is re-written in real time as we are forced to grapple with the legend of a frightening New York man made from gold. Anne Washburn (Mr. Burns: a post-electric play) returns to Woolly with a sinister and sensational new play.

SHIPWRECK: A HISTORY PLAY ABOUT 2017 is a co-production with The Public Theater.

"SHIPWRECK is a radical play, not just because of Anne’s audacity to imagine James Comey’s meeting with President Trump, but also because of what she makes visible about this current moment in our nation’s history. I’m ecstatic about bringing my two artistic families together by partnering with Oskar Eustis and The Public Theater on this US premiere."

Content transparencies for SHIPWRECK: A HISTORY PLAY ABOUT 2017 are not yet available. If you have questions, please contact our box office at 202.393.3939.

Feel free to join me in opening our moUths and saying aaallllllll the s**t we gotta say.

Lola and T met years ago in a support group for sexual abuse survivors. They’ve made a pact... and that deadline is coming at them fast. So tonight, they decide to take matters into their own hands by plotting to exact revenge on anyone who has ever f--ked with them. Spend the night with two fractured souls who let loose their fury in this fearless and f--ked up adventure. Paola Lázaro’s new work takes an unflinching look at confronting trauma, and how the bonds with our chosen family can carry us through.

"It is important to me to make space to voices that have been missing, and in the case of this brilliant play, a Latinx female writer with a young Latinx female lead at the center of her own story. Paola Lázaro is both an actor and a playwright, and her characters leap off the page with tremendous energy, authenticity, and depth." 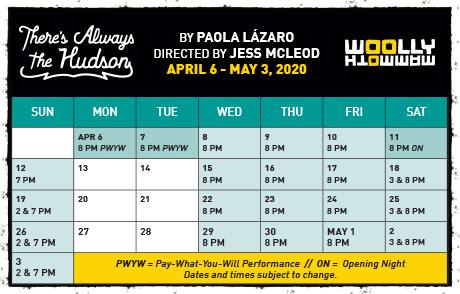 Content transparencies for THERE'S ALWAYS THE HUDSON are not yet available. If you have questions, please contact our box office at 202.393.3939.

And so, Roseland High School, prepare for your fate.

My first step to power? Is to land a first date.

A modern, darkly comic re-telling of Shakespeare’s Richard III set in the most treacherous of places– high school. Bullied because of his cerebral palsy, Richard is willing to crush his enemies in order to become senior class president. But all the scheming, manipulation, and revenge plots force him to ask the age-old question: is it better to be loved or feared?

TEENAGE DICK was commissioned and developed by The Apothetae, a company dedicated to the production of works that explore and illuminate the disabled experience, and premiered at Ma-Yi Theatre Company in association with The Public Theater.

2019 Drama League nominee for Outstanding Production of a Play

"Introducing the brilliant actors Gregg Mozgala and Shannon DeVido to the DC artistic landscape was one the many reasons why I wanted TEENAGE DICK in my inaugural season. This hysterical and riveting reimagining showcases the self-loathing that comes from social rejection, especially for those young and disabled. This show demands that we all, including our current president, reevaluate our rhetoric surrounding the disabled experience." 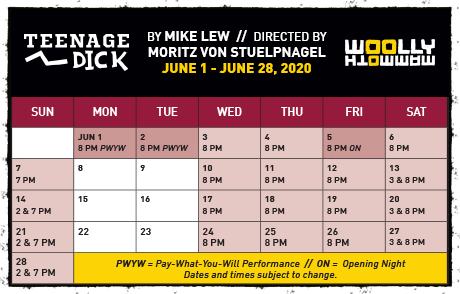 Content transparencies for TEENAGE DICK are not yet available. If you have questions, please contact our box office at 202.393.3939.

Add at least 3 more to continue

Pick your own plays and get: