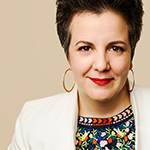 MARIA MANUELA GOYANES is the Artistic Director of Woolly Mammoth Theatre Company. Prior to joining Woolly, she served as the Director of Producing and Artistic Planning at The Public Theater, where she oversaw the day-to-day execution of a full slate of plays and musicals at the Public’s five-theater venue at Astor Place and the Delacorte Theater for Shakespeare in the Park. Earlier in her career at The Public, she managed some of the theater’s most celebrated productions, including Hamilton by Lin-Manuel Miranda, Josephine & I by Cush Jumbo, Straight White Men by Young Jean Lee, Barbecue by Robert O’Hara, and Here Lies Love by David Byrne and Fatboy Slim.

While at The Public, Maria also held a position on the adjunct faculty of Juilliard and curated the junior year curriculum of the Playwrights Horizons Theater School at NYU. She has guest lectured at Bard College, Barnard College, Brown University, Columbia University, Juilliard, the National Theater Institute at The Eugene O’Neill Theater Center, UCSD, the University of Texas-Austin, and Yale University, among others. Since 2015, Maria has also served as a member of the board of the National Alliance for Musical Theatre. From 2006 to 2008, she co-chaired the Soho Rep Writer/Director Lab with Jason Grote, and from 2004 to 2012, Maria was the Executive Producer of 13P, one of her proudest achievements.

Maria is a first-generation Latinx-American, born to parents who emigrated from the Dominican Republic and Spain. She was raised in Jamaica, Queens, and has a collection of hoop earrings to prove it. She earned her Bachelor of Arts in 2001 from Brown University.

A Note from Howard Shalwitz