Botticelli in the Fire

Sandro Botticelli is devoted to beauty, sensuality, and pleasure. While painting The Birth of Venus, however, the limits of his dedication are put to the test by the arrival of a conservative priest leading a populist revolution in Lorenzo de' Medici’s Florence. When his full-throttle, decadent ways catch up to him, will the famed artist sacrifice his work… or the life of his young apprentice, Leonardo Da Vinci?

Woolly does not offer advisories about subject matter, as sensitivities vary from person to person. If you have any questions about content, please contact our box office at 202-393-3939.

"The show itself is a total Renaissance panty-dropper, a queer-as-fuck mashup of Cabaret and Red and La Cage aux Folles"

"This is an unpredictable "only at Woolly" experience you won't want to miss."

"A delightful romp through history full of anachronism, unabashed queerness, and a gleeful disregard for even the concept of a fourth wall—all of which adds up to an explosive kick-off to Pride Month."

"It’s hard to imagine a better show than Botticelli in the Fire to see during Pride Month."

"Odom anchors the show, and he anchors it well, but in this cast of seven there are no weak links." 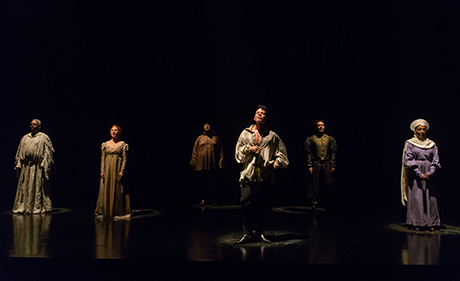 The cast of Botticelli in the Fire 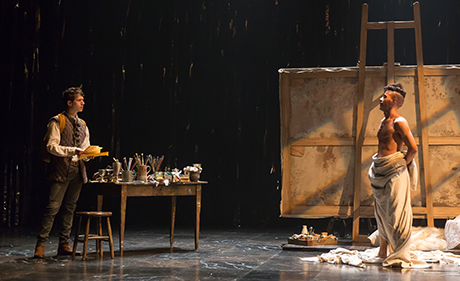 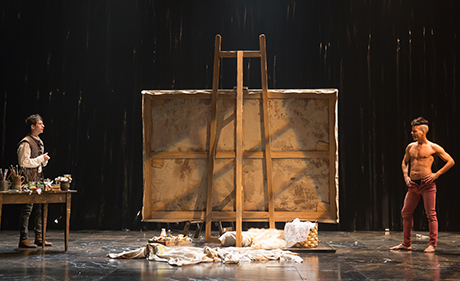 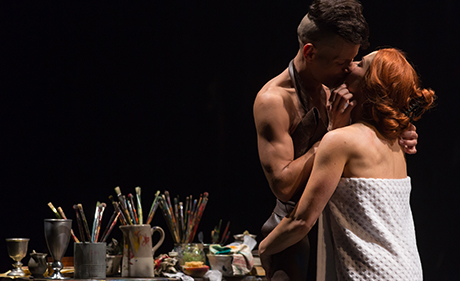 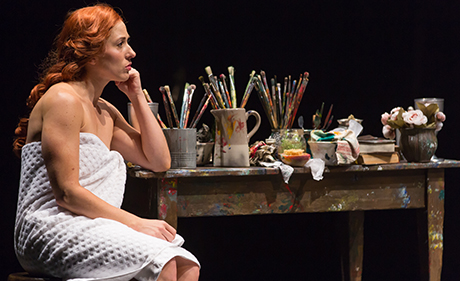 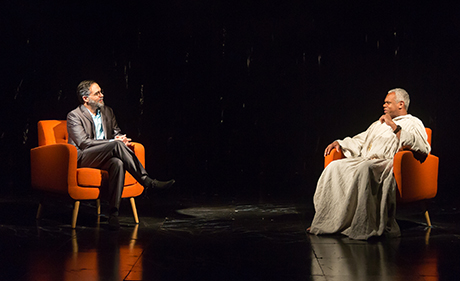 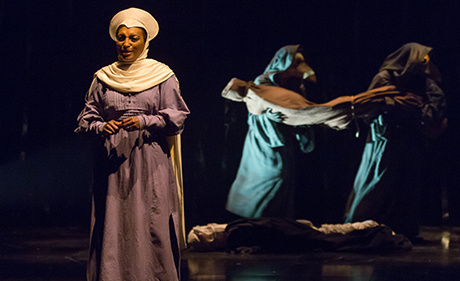 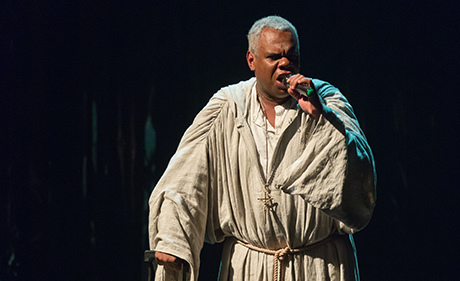 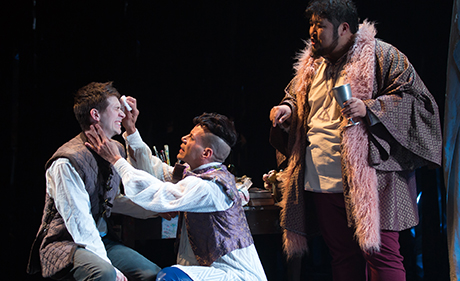 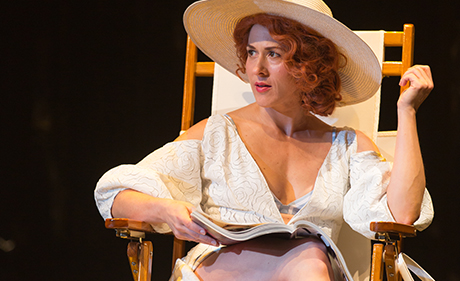 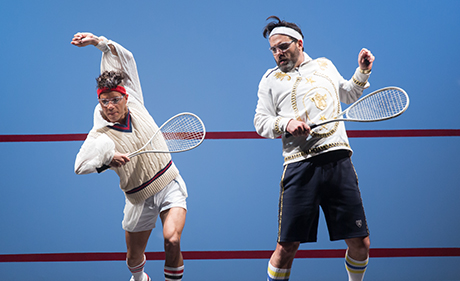 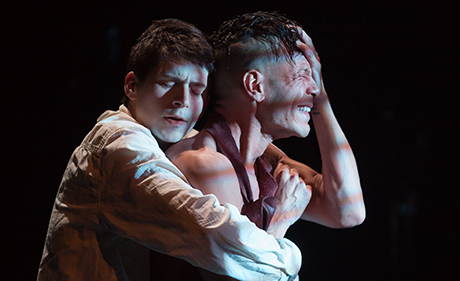 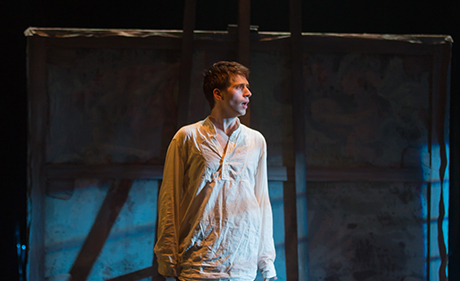 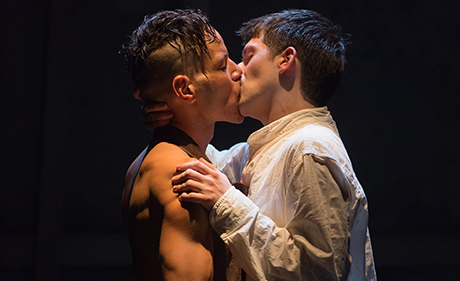 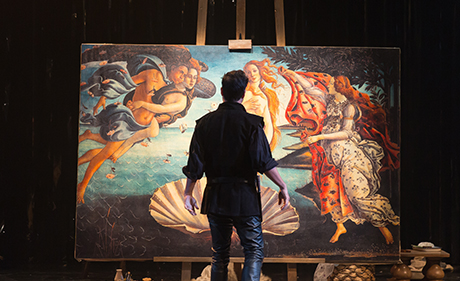 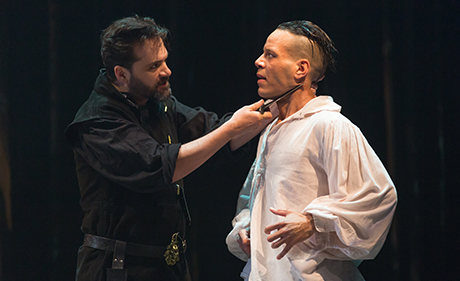 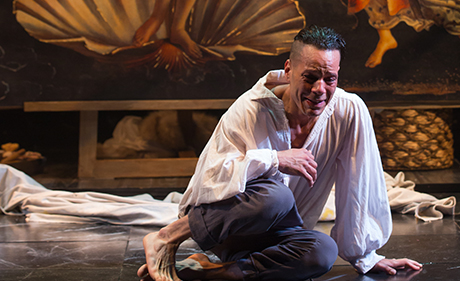 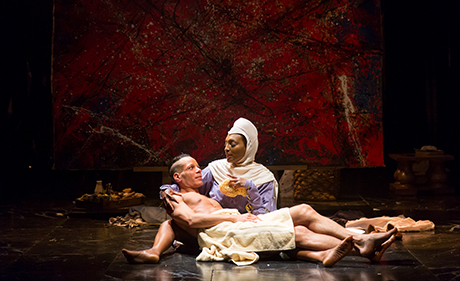 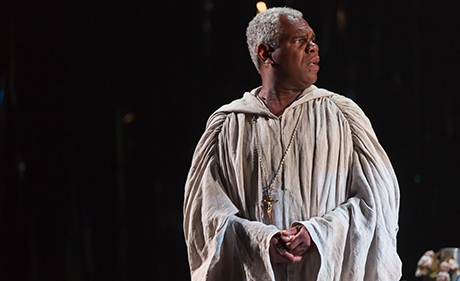 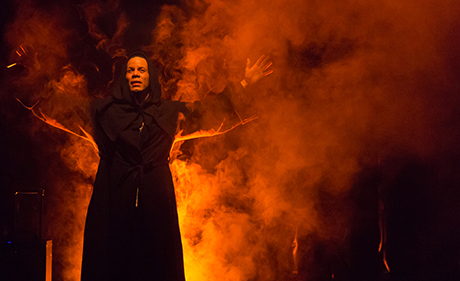 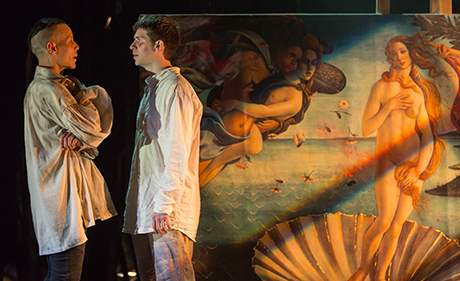 About the Playwright: Jordan Tannahill

JORDAN TANNAHILL (Playwright) is a Canadian playwright and filmmaker. His work has been presented in theatres, festivals, and galleries across Canada and internationally.

Jordan's plays have been honored with various prizes including the 2014 Governor Generals Award for Drama for his book Age of Minority: Three Solo Plays, the 2014 John Hirsch Prize for directing, and Dora Awards for Outstanding New Play for rihannaboi95 in 2013 and Concord Floral in 2015. Concord Floral also received the 2015 Carol Bolt Award and was shortlisted for the 2016 Governor General's Award for Drama. In 2016 Botticelli in the Fire & Sunday in Sodom won the Toronto Theatre Critics Award for Best New Play and its production at Canadian Stage received the Dora Award for Outstanding Production.

From 2008-2016, Jordan wrote and directed plays through Suburban Beast, a Toronto-based theatre company he founded with Rae Powell and later ran with Erin Brubacher. The company's work was staged in theatres, art galleries, a car garage, a frat house, and YouTube, and frequently involved performances by non-traditional performers.

From 2012-2016, in collaboration with William Ellis, Jordan ran the alternative art space Videofag out of their home in Toronto’s Kensington Market neighborhood. Over the four years of its operation, Videofag became an influential hub for queer and avant-garde work in Canada. Jordan’s production of Sheila Heti's All Our Happy Days Are Stupid, produced and directed with collaborator Erin Brubacher, premiered at Videofag in 2013 and went on to sold-out productions at Toronto’s Harbourfront Centre's World Stage and New York City's The Kitchen in 2015.

His book Theatre of the Unimpressed: In Search of Vital Drama, published by Coach House Press in 2015, was called “essential reading for anyone interested in the state of contemporary theatre and performance” by The Globe and Mail. It is currently on the curriculum of several North American universities.

Tannahill has been alternatively described in the press as "the future of Canadian theatre" (NOW Magazine), "the hottest name in Canadian theatre" (Montreal Gazette), and "the poster child of a new generation for whom 'interdisciplinary' is not a buzzword but a way of life" (The Globe and Mail).

About the Director: Marti Lyons

MARTI LYONS (Director) most recently directed The Wolves by Sarah Delappe at Studio Theatre and Guess Who’s Coming to Dinner for the Court Theatre in Chicago. Marti has also recently directed Native Gardens by Karen Zacarías for Victory Gardens Theatre, Twelfth Night for Montana Shakespeare, The Mystery of Love and Sex by Bathsheba Doran for Writers Theatre, Short Shakes! Romeo and Juliet for Chicago Shakespeare Theatre, Wit for The Hypocrites, Give It All Back by Calamity West for Sideshow Theatre, and The City of Conversation by Anthony Giardina for Northlight Theatre Company. She directed Wondrous Strange by Meg Miroshnik, Martyna Majok, Jen Silverman, and Jiehae Park for the Humana Festival at Actors Theatre of Louisville, as well as Will Eno’s Title and Deed for Lookingglass Theatre Company and a reading of Martín Zimmerman's On the Exhale for the New Stages Festival at Goodman Theatre, where she received the 2015 Maggio directing fellowship. Other projects include Laura Marks’ Bethany, Marks' Mine, and Will Nedved’s Body and Blood for The Gift Theatre; Catherine Trieschmann’s Hot Georgia Sunday and Theresa Rebeck's Seminar for Haven Theatre; Prowess by Ike Holter, The Peacock by Calamity West, and The Last Duck by Lucas Neff for Jackalope Theatre; The Play About My Dad by Boo Killebrew for Raven Theatre; Mai Dang Lao by David Jacobi, 9 Circles by Bill Cain, Maria/Stuart by Jason Grote, and co-directing The Golden Dragon for Sideshow Theatre. Next Marti will direct Shakespeare in Love for Illinois Shakespeare Festival, Witch by Jen Silverman for Writers Theatre, Kings by Sarah Burgess for Studio Theater, Macbeth for Chicago Shakespeare Theater, and Cambodian Rock Band by Lauren Yee for Victory Gardens Theater. Marti is an ensemble member with the Gift Theatre Company, an Artistic Associate with Sideshow Theatre Company, and a proud member of SDC. www.martilyons.com

CODY NICKELL (Lorenzo Di Medici) returns to the Woolly stage, where he has been previously seen in Baby Screams Miracle, Clybourne Park, In The Next Room or The Vibrator Play, and Stupid Fucking Bird. Other DC productions include many performances at The Folger Theatre as well as Shakespeare Theatre and Studio Theatre. For three seasons Cody was the Artistic Associate at Gulfshore Playhouse where favorite productions included All My Sons, Jacob Marley’s Christmas Carol, and most recently Constellations. Cody’s work has taken him to theaters all over the country including Portland Center Stage, Santa Cruz Shakespeare, The Wilma Theatre, Playmakers Rep, The Arden Theatre, Syracuse Stage, and Two River Theatre. Cody is the recipient of the Connecticut Critics Circle Award for Best Actor, and a three-time nominee for The Robert Prosky Helen Hayes Award. He is a graduate of the Carnegie Mellon University School Of Drama.

EARL T. KIM (Poggio du Chullu) is an international actor, theatre-creator, filmmaker, and performance artist currently based in Los Angeles, California.  His work has been seen on stages in Australia, New Zealand, Canada, Ireland, Japan, South Korea, Russia, the United Kingdom, and throughout the US. He is proud to be making his Metro DC theatre debut with Woolly Mammoth and is honored to be a part of this production. His short film Han was awarded ‘Best Narrative Short’ after premiering at the 2017 DC Asian Pacific American Film Festival, and he was recently named a ‘2018 Filmmaker to Watch’ by the LA Dance Film Festival. He holds an MFA in Acting from East 15 Acting School in London, and a BFA in Contemporary Performance from Naropa University in Boulder, Colorado.

CRAIG WALLACE (Girolamo Savanarola) is thrilled to be returning to Woolly Mammoth for Howard Shalwitz’s final season as Artistic Director. Other Woolly credits include Starving, Our Lady of 121st Street and The Last Orbit of Billy Mars. Locally, Craig has performed in numerous theatres across the DC area. Most recently he appeared as Sam in Master Harold and the Boys at Round House Theatre, and Willy Loman in Death of a Salesman and Scrooge in A Christmas Carol (recurring) at Ford’s Theatre. Regionally, he has performed all over the country including Shakespeare Theatre of New Jersey and Actors Theatre of Louisville. Craig received his BFA at Howard University, an MFA from The Pennsylvania State University and also studied at The National Theatre in London.

DAWN URSULA (Madre Maria) was last seen at Woolly in Zombie: The American by Robert O’Hara, directed by Howard Shalwitz, earning a Helen Hayes nomination. Other Woolly credits include Polignac/Mrs. Sauce in Marie Antoinette directed by Yury Urnov, The Totalitarians directed by Robert O’Hara, Black Woman/Actor 6 in We Are Proud to Present..., earning a Helen Hayes nomination, directed by Michael John Garcés who also directed her as Prudence in The Convert by Danai Gurira, for which she received a 2014 Helen Hayes Award. Also a company member with Everyman Theatre, she was recently seen in The Revolutionists by Lauren Gunderson and Intimate Apparel by Lynn Nottage. She earned a 2016 Helen Hayes award for her performance in Queen’s Girl in the World by Caleen Sinnette Jenning’s at Theatre J and will reprise the role at Everyman Theatre next season. Dawn has performed locally and regionally with theatres such as Olney, Round House, Arena Stage, Hangar, True Colors, the Kennedy Center, Rep Stage, Imagination Stage, and African Continuum Theater Company and holds other awards and nominations. Television credits include HBO’s The Wire and PBS’ Prince Among Slaves. She is a founding member of Galvanize and mentored by Vera J. Katz.

Join us for this post-show happy hour to network and mingle with artists across all disciplines to exchange ideas, projects, and philosophies!
See all Related Events