In 1920, Russian Jewish writer Isaac Babel starts a diary while wandering the countryside with the Red Cavalry. In 2010, after the crash of an aircraft carrying the Polish president, his diary is discovered among the wreckage. What did Babel write, and why does it matter so much to a low-level KGB agent who may or may not be Vladimir Putin? Describe the Night uncovers the mystery by tracing the stories of seven lost souls connected across decades by history, fiction, lies, and blood.

Pulitzer Prize-finalist Rajiv Joseph returns to Woolly after hit productions of Guards at the Taj (2016) and Gruesome Playground Injuries (2010). Describe the Night is a “work of major ambition” (New York Times) that will feel both timeless and tuned in to the age of #FakeNews. 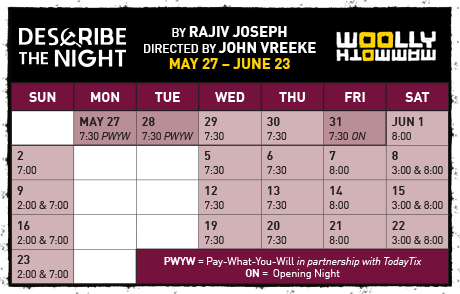 Describe the Night is made possible by generous gifts from Louis & Bonnie Cohen and Jeffrey P. Cunard

Describe the Night uses a special stage and seating arrangement to enhance the audience experience. View the seat map here.

Please be advised that Describe the Night contains instances of haze and fog, flashing light effects, and simulated gunshots.

"A bold and adventurous production"

"A spellbinding evening of theatre"

"Rajiv Joseph has an ear for the heartbeat of the moment" 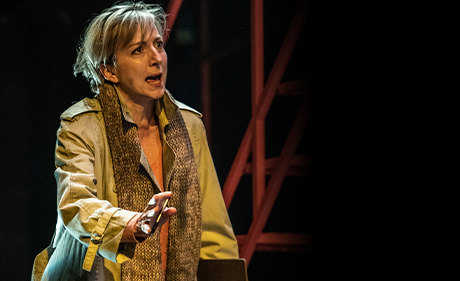 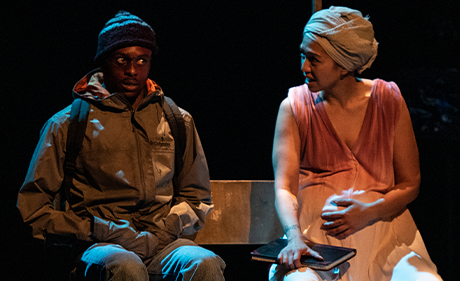 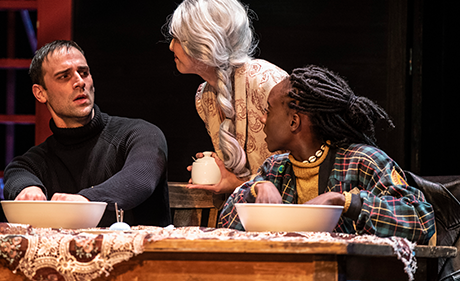 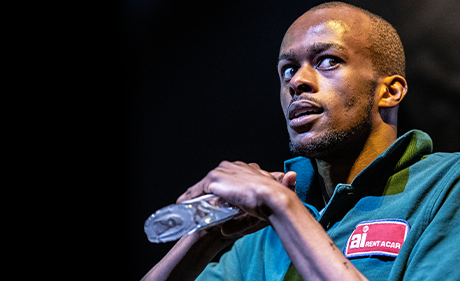 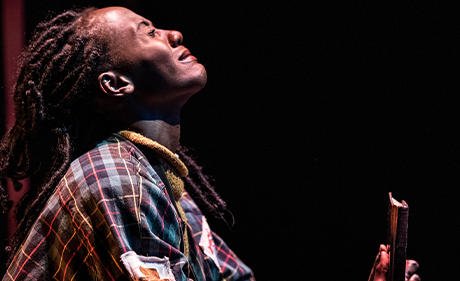 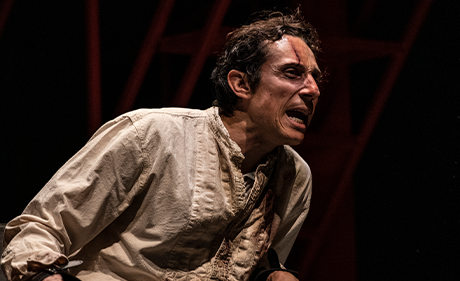 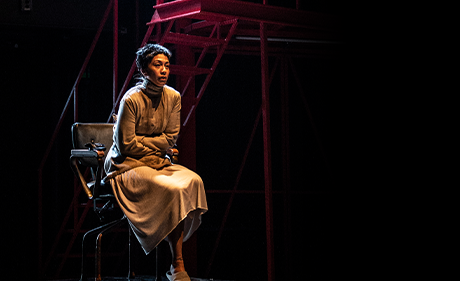 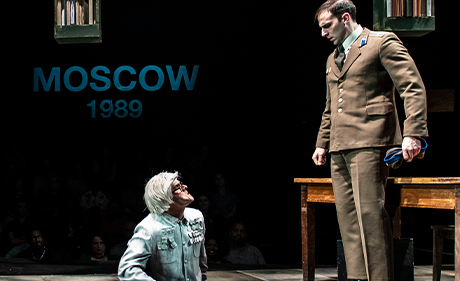 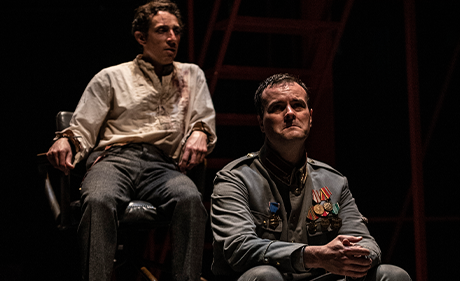 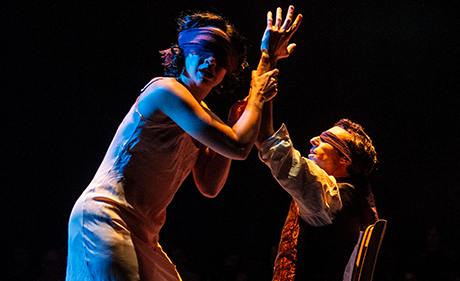 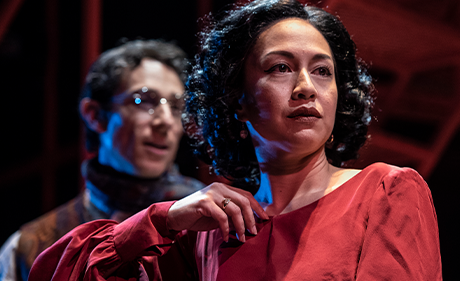 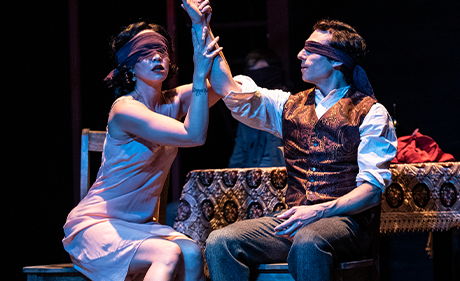 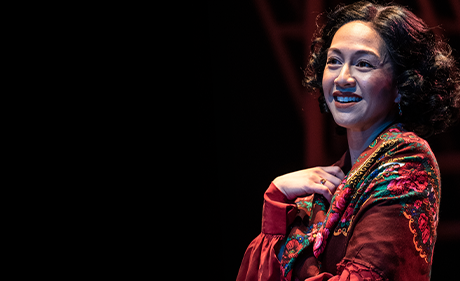 About the Playwright: Rajiv Joseph

RAJIV JOSEPH’S play Bengal Tiger at the Baghdad Zoo was a 2010 Pulitzer Prize finalist for Drama and also awarded a grant for Outstanding New American Play by the National Endowment for the Arts. He has twice won the Obie Award for Best New American Play, first in 2016 with Guards at the Taj (also a 2016 Lortel Winner for Best Play) and then, last year, for Describe the Night. Other plays include Archduke, Gruesome Playground Injuries, Animals Out of Paper, The Lake Effect, The North Pool and Mr. Wolf. Joseph has been awarded artistic grants from the Whiting Foundation, United States Artists and the Harold & Mimi Steinberg Charitable Trust. He is a board member of the Lark Play Development Center in New York City, where he develops all his plays. He served for three years in the Peace Corps in Senegal and now lives in Brooklyn, NY.

About the Director: John Vreeke

JOHN VREEKE most recently directed the west coast premiere of the 2018 Pulitzer Prize winner Cost of Living by Martyna Majok. As a long time Woolly Mammoth Theatre company member he is known for his directorial and development work on second productions of plays that have gone on to become staples in the regional theater circuit. Plays such as Boom by Peter Nachtrieb and A Bright New Boise by Sam Hunter. He has worked in the DC area Theater for the past eighteen years: Mosaic, The Round House, Theater J, Metro Stage, Olney Theater, Forum, Washington Shakespeare Company, Theater Alliance, Everyman, the Kennedy Center and the Helen Hayes Awards. He has six HH nominations for best director. He is best known for his successful work on problem plays, plays that are considered difficult and risky. He began his career at the Alley Theater in Houston where he worked as the staff director for seven years before moving to Seattle where he worked as a casting associate and associate producer on the hit CBS TV series Northern Exposure.

MORIAMO TEMIDAYO AKIBU (Urzula) is excited to be making her Woolly stage debut! They previously appeared in Woolly Mammoth’s reading of Menstruation: A Period Play. Temidayo is an actor, director, playwright, and collaborator based in Washington, DC. Some of her favorite credits include: Coffeehouse Chronicles # 124 (Ping Chong and Company at La MaMa ETC); She a Gem, How to Catch a Star (The Kennedy Center); The Ruby Sunrise (Shakespeare Theatre Company); The Interstellar Ghost Hour (Longacre Lea—Helen Hayes 2019 Outstanding Supporting Actress Helen n.) Isms: A Tragicomedy (Mosaic Theatre Company of DC); The Burst (The Keegan Theatre); Love and Information (Forum Theatre). Temidayo is a company leader with Smithsonian’s Discovery Theater. They hold a BA in Theatre from The University of Maryland. Follow her on Instagram: @xo_temidayo. They thank you for reading.

TIM GETMAN (Nikolai) has worked onstage for over 20 years in the Washington/Baltimore area, recently seen in The Arsonists at Woolly. He has also been seen at Arena Stage, Everyman, Folger Theatre, Rep Stage, Round House, Studio Theatre, Signature Theatre, Shakespeare Theatre, and Center Stage, among others. At Woolly, Tim has also appeared in The Unmentionables, Gruesome Playground Injuries, Detroit,  Appropriate, Zombie, The Nether, and Kiss. Recent television credits include The Men Who Built America and Veep. He holds a BA from Macalester College and Trinity College, Dublin.

KATE EASTWOOD NORRIS (Mariya) is delighted to be back among the Mammoths where she is a company member. Previous Woolly audiences may have seen her in Baby Screams Miracle, Stupid Fucking Bird, She Stoops To Comedy, Fever Dream, Full Circle, Big Love, and Bug. Kate’s favorite regional credits include productions at Berkeley Rep, Arena Stage, Studio Theatre, Folger Theatre, Portland Center Stage, Santa Cruz Shakespeare, Round House Theatre, The Humana Festival at Actor’s Theatre of Louisville 2011 and 2012, Florida Stage, Gulfshore Playhouse, Two River Theatre, Arden Theatre, Wilma Theatre, Delaware Theatre, Syracuse Stage and special appearances with the Alaskan, Baltimore, and Naples Symphony Orchestras. Kate has received two Helen Hayes awards for her work in DC, and Philadelphia’s Barrymore Award. She holds an MFA from Mary Baldwin University in Shakespeare and Performance with a Comedy emphasis and also an MA in Humanities and Creativity from Pacifica Graduate Institute.

A dialogue and exchange between audience members and community partners about the vital questions raised by DESCRIBE THE NIGHT.

A dialogue and exchange between audience members and community partners about the vital questions raised by DESCRIBE THE NIGHT.
See all Related Events