Something is keeping me from what I could be.

And that something, It thinks that it has made me who I am.

Beverly insists the celebration for Grandma’s birthday be perfect. But her husband is useless, her sister is into the wine, and her daughter’s secrets are threatening to derail the day. Meanwhile a group of spectators has put them all under surveillance. Soon the voyeurs launch an invasion on the festivities, forcing the family to battle for their very identities. Jackie Sibblies Drury (We Are Proud to Present…) returns to Woolly to boldly confront our perceptions of racism in America by ripping the conventional family drama to shreds.

Winner of the 2019 Pulitzer Prize for Drama

"FAIRVIEW is a game-changing original work about race, challenging us as much as it entertains, and ultimately shattering the lenses with which we see each other. There is no better way to announce my ambitions than to produce a play as exciting and thorny as FAIRVIEW. Plus Stevie Walker-Webb (Ain’t No Mo’ at The Public Theater) is an astounding director who I am excited to not only dig into this material with but also to introduce him to DC audiences." 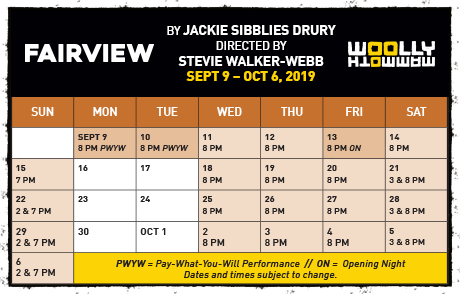 CONTENT TRANSPARENCY: FAIRVIEW contains profanity, depictions of racism, and a request for audience participation that is designed to be fully accessible.

For a detailed summary of the show, INCLUDING SPOILERS, please click here. If you have further questions about any content please contact our box office at 202.393.3939.

"This play aims to make you uncomfortable. And that’s a good thing."

"You should see it. White person, black person. Any person. And listen. Now."

"Has you saying “wow” days after, as you reflect on the ingeniousness of the concept and the crafting"

"A social thriller that explores the intersection of race and surveillance"

"An elegant appeal for justice, tangible action, and the urgent need for new stories about black families"

"A glorious, scary reminder of the unmatched power of live theater to rattle, roil and shake us wide awake" 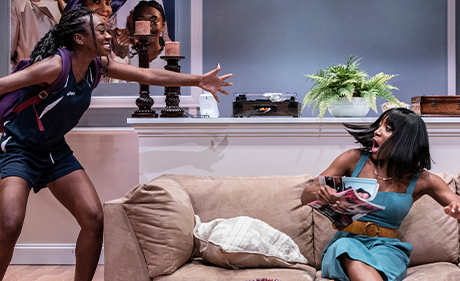 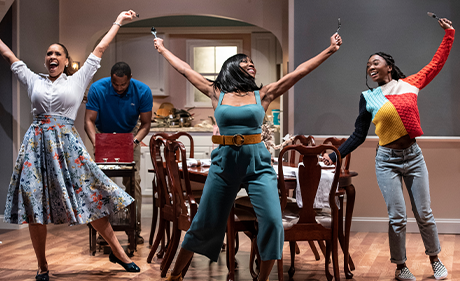 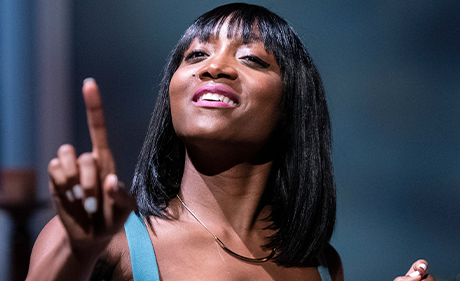 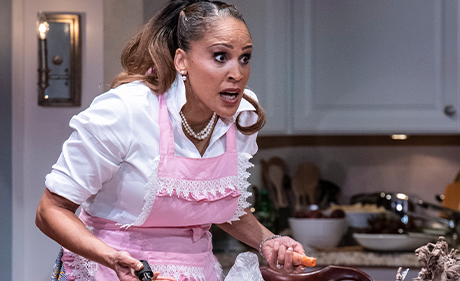 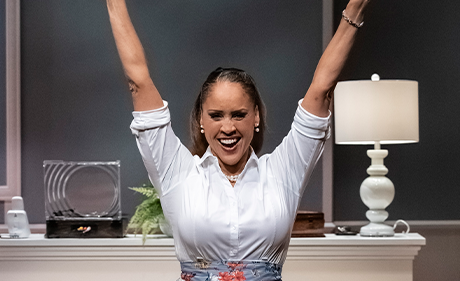 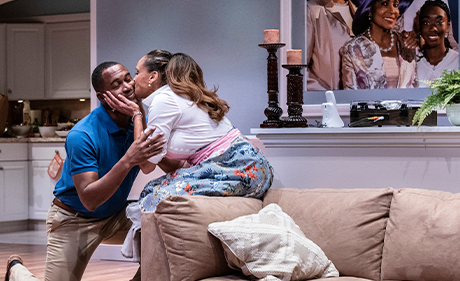 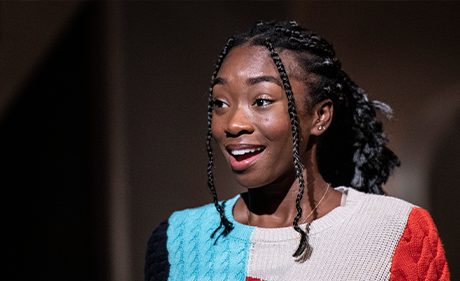 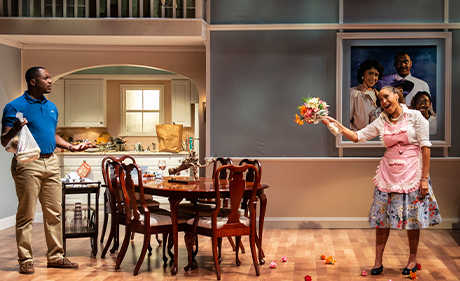 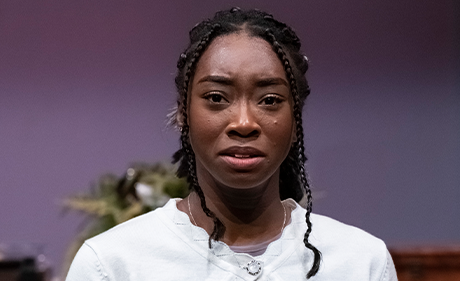 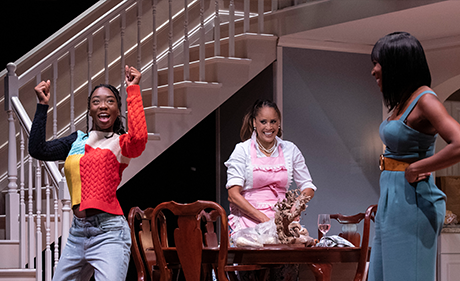 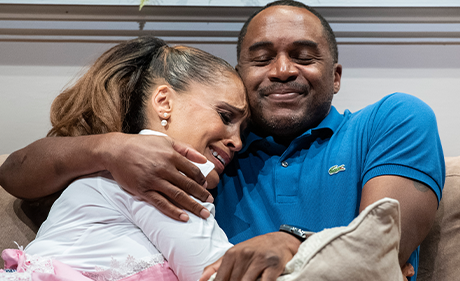 STEVIE WALKER-WEBB (Director) is an Obie Award winning director, performing artist, and cultural worker, a former 2050 Fellow at New York Theatre Workshop and recipient of the Princess Grace Award for Theatre. Off-Broadway: Jordan E. Cooper’s Ain’t No Mo’ at The Public Theatre. His upcoming projects include the world premiere of One In Two by Donja Love with The New Group in New York City and Esai’s Table by Nathan Yungerberg at Cherry Lane. He is the Founding Artistic Director of the Jubilee Theatre in Waco, Texas, holds an MFA from The New School, a BS in Sociology from the University of North Texas, and is an Emerge-NYC alumnus. Stevie is overjoyed and honored to be making his Woolly premiere with the powerful work of Jackie Sibblies Drury. steviewalkerwebb.net

SHANNON DORSEY (Jasmine) returns to Woolly, where she was nominated for the Helen Hayes Award for Outstanding Supporting Actress for An Octoroon. Other Woolly credits include BLKS, Familiar, Kiss; All the Way (Arena Stage), A Christmas Carol (Ford’s Theatre), the Helen Hayes Award-winning A Midsummer Night’s Dream and Carmen (Kennedy Center/Synetic Theater); Unexplored Interior (Mosaic Theater Company); Two Trains Running (Round House Theatre); Skeleton Crew, Marcus; or the Secret of Sweet, In the Red or Brown Water, and Breath, Boom (Studio Theatre); Stick Fly (Everyman Theatre); and The Shipment (Forum Theatre). Regional credits include Safe House and The Trip to Bountiful (Cincinnati Playhouse in the Park); A Raisin in the Sun (Perseverance Theatre); The Great MacDaddy (Negro Ensemble Company NYC); The Power of the Trinity (NYC SummerStage); and The Man Who Ate Michael Rockefeller (West End Theatre NYC). Shannon received her B.A. in Communications, Theater, and African-American studies at Temple University. She thanks God for the abundance of love and support from her family and friends. Instagram: @cooldiscoshann

CHINNA PALMER (Keisha) has appeared in ​Mothering While Black (​Young Playwrights Theatre), ​In the Red and Brown Water ​(Ira Aldridge Theatre), ​A Midsummer Night’s Dream ​(Ira Aldridge Theatre)​, ​the Hothouse New Play Development (Theatre Alliance) and ​Klecksography: Collective Ink ​(Rorschach Theatre). She is a fresh graduate from Howard University, and has received additional training from the British American Drama Academy where she performed in Miss Julie and the Stronger. ​Chinna is eager to perform around the city and beyond–starting with her Woolly debut. Follow and keep up with her on Instagram @Chinna.palmer

CODY NICKELL (Jimbo) returns to the Woolly stage, where he has been previously seen in Botticelli in the Fire, Baby Screams Miracle, Clybourne Park, In The Next Room or The Vibrator Play, and Stupid Fucking Bird. Other DC productions include many performances at The Folger Theatre as well as Roundhouse Theatre, Shakespeare Theatre, and Studio Theatre. For three seasons Cody was the Artistic Associate at Gulfshore Playhouse where favorite productions included All My Sons, Jacob Marley’s Christmas Carol, and most recently Constellations. Cody’s work has taken him to theaters all over the country including Portland Center Stage, Santa Cruz Shakespeare, The Wilma Theatre, Playmakers Rep, The Arden Theatre, Syracuse Stage, and Two River Theatre. Cody is the recipient of the Connecticut Critics Circle Award for Best Actor, and a four-time nominee for Helen Hayes Award. He is a graduate of the Carnegie Mellon University School Of Drama.

KIMBERLY GILBERT (Suze) has been a Woolly company member since 2006 and this marks her 17th production with this theatre, which is an insane statistic. She was last seen here as Billie Irons in The Arsonists. Recent theatre credits include: Oslo, Round House Theatre; The Last Wide Open, Cincinnati Playhouse; The Panties, The Partner and The Profit, Shakespeare Theatre Company; Born Yesterday, Ford’s Theatre. Very proud to be a Woolly Mammoth.

LAURA C. HARRIS (Bets) is making her Woolly Mammoth debut. Previous Washington, DC credits include The Heiress at Arena Stage, Kings, Cloud 9, Time Stands Still, Bachelorette, and Red Speedo at Studio Theatre, The Flick and Tender Napalm at Signature Theatre, NSFW, Seminar, Amadeus, Young Robin Hood, and 26 Miles at Round House Theatre, Vicuna at Mosaic Theater, Awake and Sing! at Olney Theatre Center, Love and Information, Passion Play, World Builders, and Amazons and Their Men with Forum Theatre, Our Class at Theatre J, The Winter’s Tale and The School for Scandal at Folger Theatre, and An Experiment with an Air Pump with Potomac Theatre Project, along with extensive on-camera and voiceover work. Laura is a graduate of Middlebury College, and can next be seen as Henrietta Leavitt in Silent Sky at Ford’s Theatre. lauracharris.com

When They See Us, Part 1

Join Woolly Mammoth and SURJ DC for a screening of WHEN THEY SEE US, PART 1, the story of the Exonerated Five.

When They See Us, Part 4

Join Woolly Mammoth and SURJ DC for a screening of WHEN THEY SEE US, PART 4, the story of the Exonerated Five.
See all Related Events