It’s winter in Minnesota, and an immigrant Zimbabwean family is preparing for the wedding of their eldest daughter. But when the bride insists on observing roora, a traditional bride-price ceremony, it opens a deep rift in the household. Rowdy and affectionate, Familiar pitches tradition against assimilation among the members of one devoted family. Which will prove stronger: the customs they keep… or the secrets they’ve kept buried?

Woolly does not offer advisories about subject matter, as sensitivities vary from person to person. If you have any questions about content, please contact our box office at 202-393-3939.

"The radiant cast... pulls the pin on explosive laughs and leaves emotional room for the long, serious twist at the end."

"Familiar is, quite simply, a comedic masterpiece."

"Familiar at Woolly Mammoth Theatre Company is a Must-See"

"Profoundly refreshing... Familiar is an outstanding entry in the Women's Voices Theater Festival"

"A crowd-pleasing, sweet-hearted sitcom with a provocative edge"

"A fiercely funny new play...Ms. Gurira weaves issues of cultural identity and displacement, generational frictions and other meaty matters into dialogue that flows utterly naturally. Her engaging characters are drawn with sympathy." 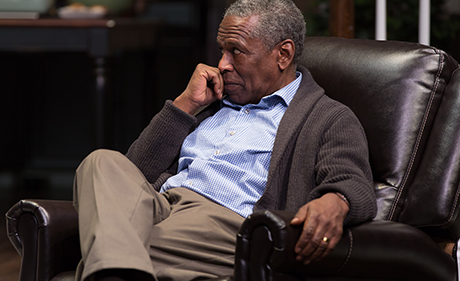 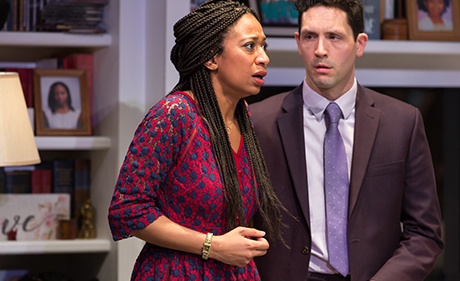 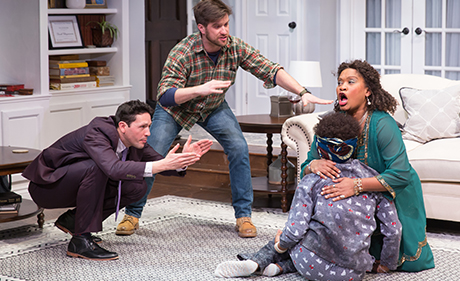 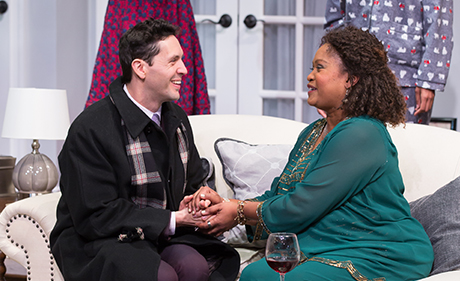 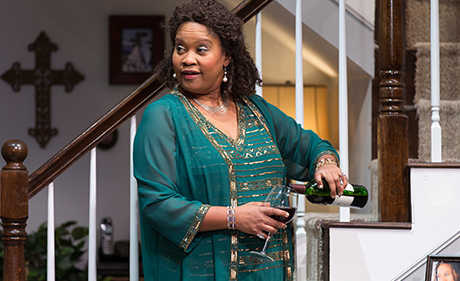 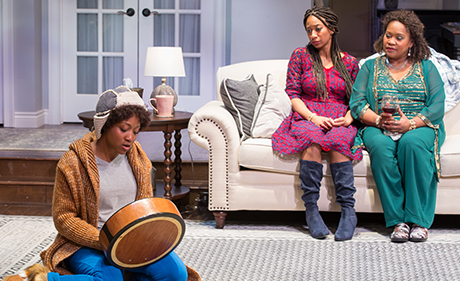 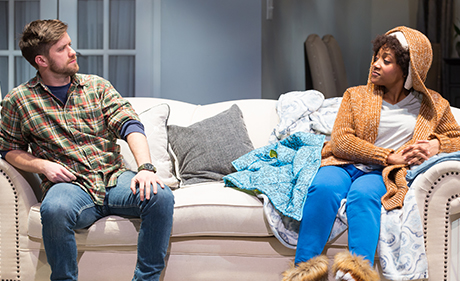 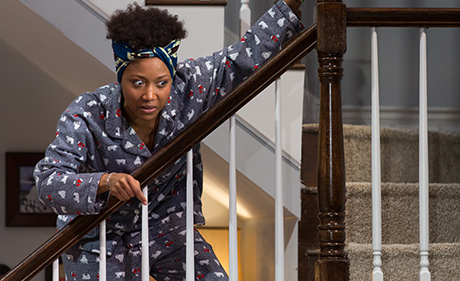 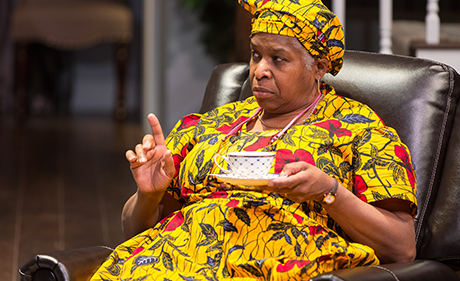 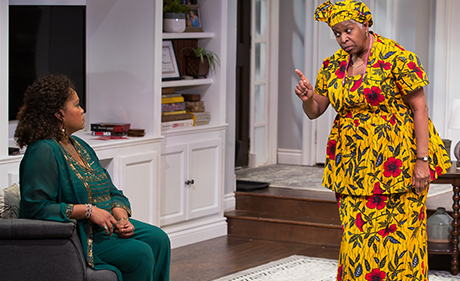 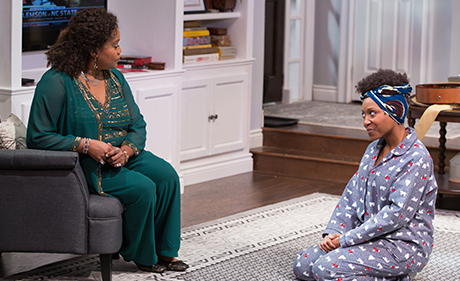 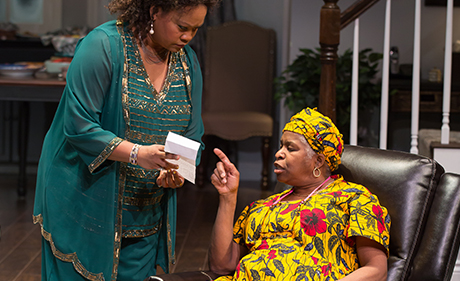 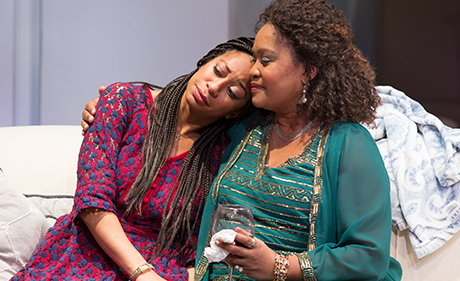 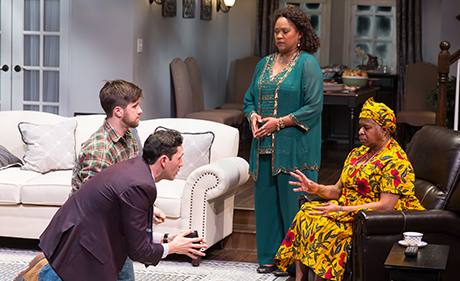 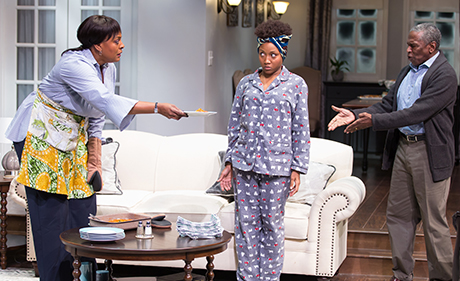 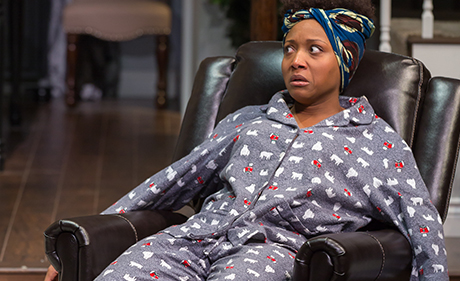 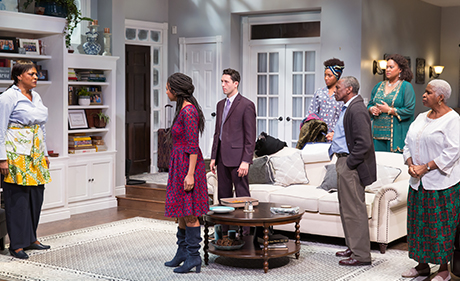 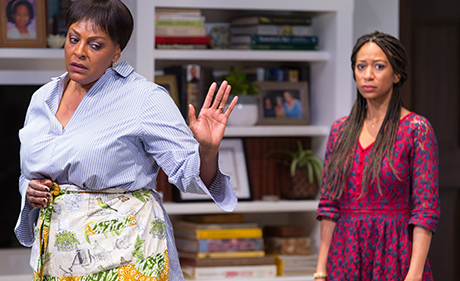 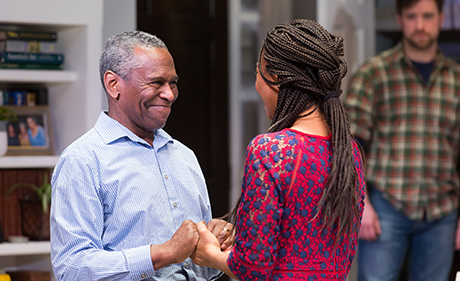 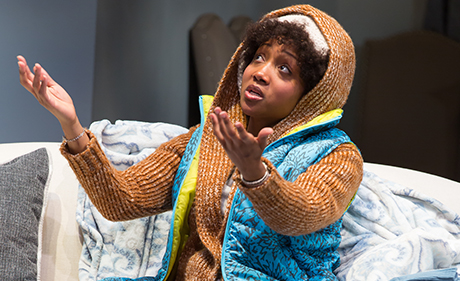 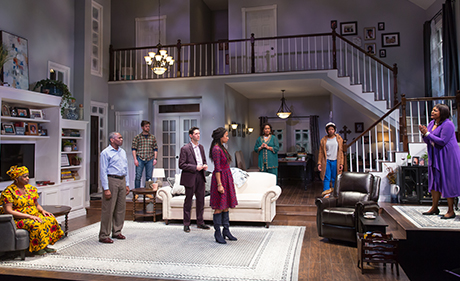 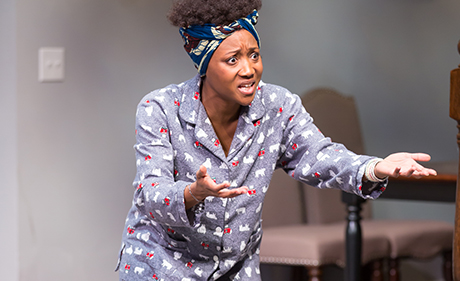 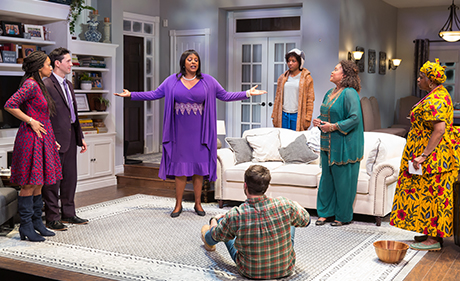 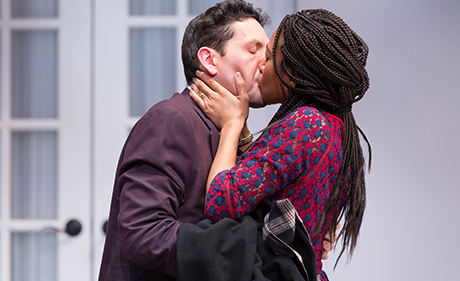 About the Playwright: Danai Gurira

DANAI GURIRA (Playwright) is an award-winning playwright and actress. Danai’s play Familiar received its world premiere at Yale Repertory Theatre directed by Rebecca Taichman. Her play The Convert, a historical drama set in Rhodesia (present day Zimbabwe), received world premiere co-productions through McCarter Theater, the Goodman Theatre, and CTG’s Kirk Douglas Theatre, winning the Stavis Award, LA Drama Critics Award, and six Ovation Awards. Danai’s initial success was as the co-lead of In the Continuum, and she subsequently received a grant for research in Liberia which resulted in her second play, Eclipsed. As an actress, Danai currently stars as Michonne, one of the most popular characters in AMC’s critically-acclaimed original series The Walking Dead. Danai’s other film credits include Mother of George, The Visitor, 3 Backyards, and Restless City. Danai was a Hodder Fellow at Princeton University and she is also the recipient of the prestigious Whiting Writers Award (2012). She is co-founder and President of Almasi, a Zimbabwean American Dramatic Arts Collaborative Organization. Danai was born in the US and raised in Zimbabwe by Zimbabwean parents. She holds an MFA from Tisch School of the Arts, NYU.

About the Director: Adam Immerwahr

KIM SULLIVAN (Donald) is honored to make his Woolly Mammoth debut. Most recently he portrayed Wynton in The Royale at American Stage, St. Petersburg, FL. He is extremely proud of completing the August Wilson Cycle also at American Stage, where he performance in all ten of Mr. Wilson’s plays. DC audiences may have caught him as Roosevelt Hicks in the Studio Theatre production of Radio Golf. The Clean House at Milwaukee Rep. Major Barbara at Missouri Rep. The Crucible (Danforth) Syracuse Rep. A Raisin in the Sun (Walter Lee) at Capital Rep, Albany, NY. Donald in You Can’t Take it With You at Geva, Rochester NY. He won an AUDEICO Award supporting Andre DeShields in Dream On Monkey Mountain at the Classical Theatre of Harlem, Polonius in Hamlet
New Perspective Theatre, New York. He spent two years as Judge Runyon on One Life to Live. Thanks Andy.

SHANNON DORSEY (Nyasha) returns to Woolly for Familiar, where she was nominated for the Helen Hayes Award for Outstanding Supporting Actress for An Octoroon. Other Woolly credits include Kiss; All the Way (Arena Stage), the Helen Hayes Award-winning A Midsummer Night’s Dream and Carmen (Kennedy Center/Synetic Theater); Unexplored Interior (Mosaic Theater Company); Two Trains Running (Round House Theatre); Marcus; or the Secret of Sweet, In the Red or Brown Water, and Breath, Boom (Studio Theatre); Stick Fly (Everyman Theatre); and The Shipment (Forum Theatre). Regional credits include Safe House and The Trip to Bountiful (Cincinnati Playhouse in the Park); A Raisin in the Sun (Perseverance Theatre); The Great MacDaddy (Negro Ensemble Company NYC); The Power of the Trinity (NYC SummerStage); and The Man Who Ate Michael Rockefeller (West End Theatre NYC). Shannon received her B.A. in Communications, Theater, and African-American studies at Temple University. She thanks God for the abundance of love and support from her family and friends.

TWINKLE BURKE (Margaret) is thrilled to be making her debut at Woolly Mammoth. Favorite theatre roles include Veronica in Valley Song at Dorset Theatre Festival (Winner of the Audience award for Best Actress, and voted 10 Best Shows by the Boston Globe), and The Ghost of Christmas Present in A Christmas Carol at Virginia Stage Company. TV: Red Oaks, Gotham, Elementary, and Luke Cage. Film: La Vida Inesperada, Bottled Up. Upcoming: Furlough with Tessa Thompson and Melissa Leo. Twinkle is a graduate of the University of North Carolina School of the Arts and a proud member of Actor’s Equity Association. She is eternally grateful for the love and support of her family, especially her husband, Brad, and son, Ezra. Laugh as much as you breathe!

CHERYL LYNN BRUCE (Anne) is pleased to make her Woolly Mammoth debut. A Chicago native, her credits include Hilary and Clinton, The Gospel of Lovingkindness, The Snow Queen (Victory Gardens), the Helen Hayes Award-winning From the Mississippi Delta (Hartford Stage, Arena Stage, Circle-in-the-Square, Old Globe); The Convert (McCarter; Goodman and Kirk Douglas Theatres); Head of Passes, Nomathemba, The Compass, Intimate Apparel, The Grapes of Wrath, Everyman (Steppenwolf); RACE (Lookingglass Theatre); The Old Settler (Writers’ Theatre); The Story (Milwaukee Repertory); Cry, The Beloved Country, The Dreams of Sarah Breedlove, Oo-Bla-Dee, Trojan Women (Goodman Theatre); Joe Turner’s Come and Gone (Missouri Repertory) Cheryl received her B.A. in Speech and Theatre at University of Illinois at Chicago, and is profoundly grateful for the love and support of her husband and family.

ANDY TRUSCHINSKI (Brad) NEW YORK: Broadway: The Heidi Chronicles; Off-Broadway: Luft Gangster; NATIONAL TOUR: War Horse; REGIONAL: Premiere Stages: The People Before the Park; The Goodman: A Christmas Carol; Chicago Shakespeare: A Midsummer Night’s Dream, Comedy of Errors, Macbeth; Milwaukee Chamber Theatre: The Sum of Us; American Players Theatre: Hay Fever, Comedy of Errors, The Matchmaker, The Winter’s Tale and more; Notre Dame Shakespeare Festival: The Merchant of Venice and as Hamlet in Hamlet. Andy is also an avid writer. Follow his debut short film, The Root of Happiness, on Facebook and Instagram—@TheRootofHappinessFilm and Twitter - @RootofHappy. Thanks for coming to the show!