From the one-woman dynamo who brought the Obie Award-winning No Child… to Woolly in 2008 comes a rich slice of Puerto Rican immigrant life that “glows with humor” (New York Times). If you’ve ever seen Nilaja Sun’s virtuosic performance style, you’ll want to experience it again…and if you haven’t, you must not miss the chance to be transported to Pike St.

On the Lower East Side, a mother works hard to keep the electricity flowing for her daughter’s respirator while a hurricane looms nearby. As she prepares for disaster, a vibrant host of characters—a decorated war veteran, her ne’er-do-well father, her octogenarian downstairs neighbor—bring new meaning to the phrase “it takes a village.”

We Endured Hardships, an art exhibit curated by Josette Bailey, is inspired by Hurricane Sandy and its impact on New York City’s Lower East Side neighborhood, the home of the characters in Pike St. The exhibit includes work by photographer Tony Gyepi-Garbrah and visual artist Melinda Montilla Nickerson.

"Glows with humor... So full of vivid life."

"What the pliable, imaginative Sun delivers is one of the greater acts of humanity you’re likely to see on a Washington stage this year."

"An epiphany of empathy... A shaman for humanity’s wholeness."

"Thrillingly full of color, energy, and throbbing with details of Puerto Rican immigrant life... An exciting and vibrant theatrical experience." 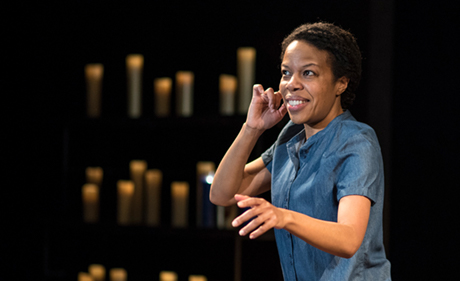 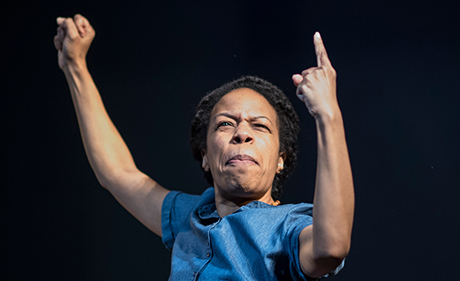 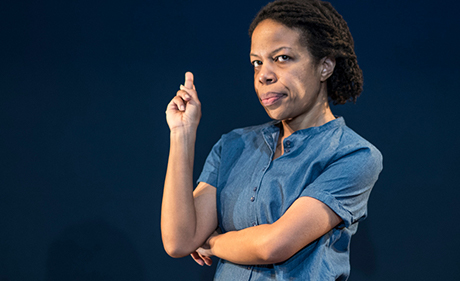 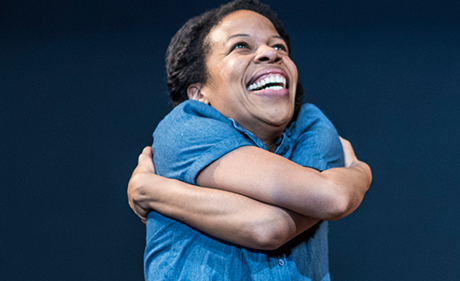 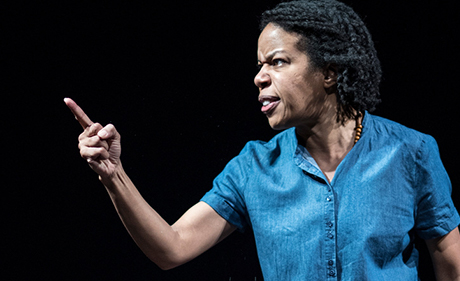 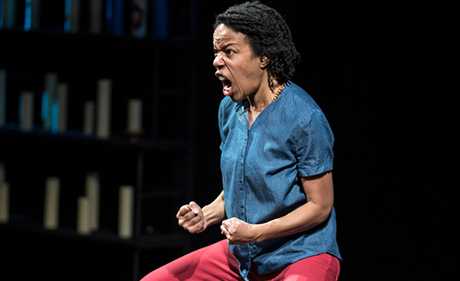 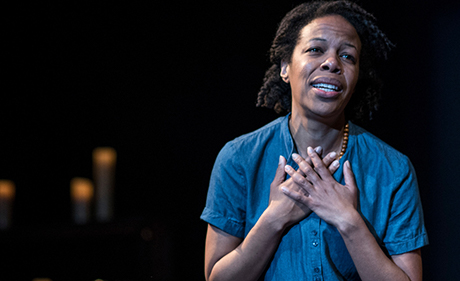 NILAJA SUN is the writer and solo performer of the Off-Broadway play No Child..., directed by Hal Brooks. No Child... was commissioned by, and had its initial run with, Epic Theatre Ensemble, followed by a year-long run at the Barrow Street Theatre and a subsequent national and international tour, which included a very successful run at Woolly Mammoth. Her awards include: Obie, Helen Hayes, Lucille Lortel, Theater World Award, and two Outer Critics Circle Awards, including the John Gassner Playwriting Award for Outstanding New American Play. Her NYC theatre credits include Public Enemy, The Commons of Pensacola, Einstein's Gift, Huck, and Holden. Her television and film credits include Madam Secretary, BrainDead, The Good Wife, 30 Rock, Law & Order: SVU, Louie, and The International. Pike St., which was originally commissioned by Epic, had its world premiere at the Abrons Arts Center in New York City. A native of the Lower East Side, she is a Princess Grace Award winner and has worked as a teaching artist for more than 15 years.

About the Director: Ron Russell

RON RUSSELL (Director) is the Co-Founder and Executive Director of New York City’s Epic Theatre Ensemble.  The threads of professional directing and producing, community activism, and education have run throughout Ron’s career and intertwine completely in the work of Epic.  After graduating as a Neuroscience major (yes, seriously) from Oberlin College in 1992, Ron acted as Founding Artistic Director of the nationally acclaimed Summer Theatre Enrichment Program at El Centro de Servicios in Lorain, Ohio, an annual summer program that exists in a constituent-led capacity to this day.  While receiving his MFA in Directing under the RSC’s Barry Kyle from Louisiana State University, he co-founded Swine Palace Theatre (the state theatre of Louisiana) and brought several plays on tour across the state, while also assistant directing Kyle at Theatre for a New Audience in NYC and Actor’s Theatre of Louisville.  While in San Diego from 1995-96, Ron founded UBI Rep Theatre and directed at San Diego Repertory Theatre, while extending his activism (forged with ACT/UP in the 80’s and early 90’s) at an organization called Voter Revolt.

He has directed extensively regionally and in NYC, including 12 Off-Broadway productions (highlights including J.B. Priestley’s Time and the Conways, Kate Fodor’s Hannah and Martin, Vern Thiessen’s Einstein’s Gift and A More Perfect Union, George Bernard Shaw’s Widowers’ Houses in a new adaptation he co-wrote with Godfrey L. Simmons, Jr.) and countless “Journeys” culminations at schools across the city.  He has also acted as dramaturg and sound designer on many other notable Epic productions, including award-winning shows like Nilaja Sun’s No Child… (which he developed as a producer and director) and Judith Thompson’s Palace of the End.