Woolly Mammoth is thrilled to partner with Spit Dat, DC’s longest running open mic, on monthly spoken word performances. All events are free and open to the public.

All scheduled events are IN PERSON at Woolly Mammoth, 641 D St NW.

All attendees must provide proof of vaccination or a negative PCR COVID-19 test taken within 72 hours of the event upon entering the event.

All audience members and open mic participants will be required to wear masks. Capacity limited for safety reasons.

Woolly Warriors and Spit Dat Fam, it is time to come...HOME! On Monday, October 18th, we welcome you all to the first in-person edition of Spit Dat in Residence at Woolly Mammoth since early 2020. The chance to share your soul on the open mic, and feel the unique energy of the Spit Dat experience in the flesh should be more than enough to bring you out of the house! But wait, there’s more—featuring for us will be no less than Crystal Lyn and E-Baby! Crystal Lyn’s sensual stylings drip into her every eclectic expression as a poet, actress, entrepreneur and co-founder of the DMV Renaissance Awards. And speaking of said awards, E-Baby is their most nominated poet, known for his charismatic performances and clever haikus. So why should you be in the building for this Homecoming celebration? “Baby,” it’s “Crystal” clear. Get the chance to spit alongside our fantastic hosts and features on the OPEN MIC! The list is filling up fast, so if you want to get on the mic, sign up for a slot here and don’t forget to book your tickets! 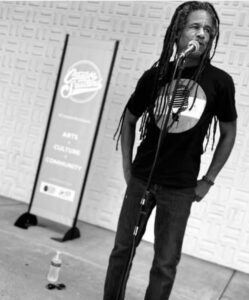 Eric "E‑Baby" Smith began writing poetry in July, 2000; since then he’s opened for R&B artists Musiq Soul Child (2002), Me’Shell N’degeOcello (2002), Heather Headley (2003), Kevon Edmunds (2003), & Lyfe Jennings (2008). Since signing with agent Tracy Wiggs of Jus Wiggin Entertainment in 2002, his “1 Poet Poetical Tour” has reached over 200 colleges & universities across the US. In 2011, he was the Male Spoken Word Performer of the Year; and in 2012, the Haiku of the Year by the National Underground Spokenword & Poetry Association [NUSPA]. In 2013 E-Baby was nominated for the Poet of the Year by the National Poetry Awards; and, in 2020 he was nominated for 4 DMV Renaissance Awards. He’s performed on local cable tv shows, educated conferences, entertained festivals, hosted countless poetry events, and featured on Washington, DC radio stations WPGC, WKYS & WHUR along with numerous internet radio programs. An employee of the Library of Congress, he preaches the importance of Copyright and gives out information on how to properly register written work into the U.S. Copyright Office. E‑Baby has competed in, and won, numerous poetry slams from Virginia to New York; and currently touring the country with his 2 CDs ["My Thoughts Are In This Ink" (2004) & "INKTOXICATED" (2011)] & a book ["HAIKU-N-U"]. He currently hosts an open-mic poetry night at the famous Busboys and Poets restaurant in Hyattsville, MD [every 4th Thursday of the month]; plus their Instagram Open Mic [@busboysandpoets - every 4th Wednesday of the month]. You can find all of his info, tour dates & purchase merchandise at www.ebabypoems.com. 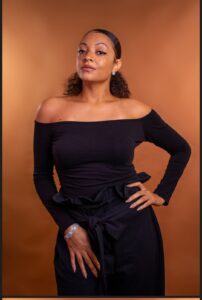 Maryland native Crystal Lyn began writing poems and short stories as a child. Her vivid imagination was the fuel for her creativity. However, becoming a young mother put a pause on those writing dreams. As her children grew, the passion to create never died. She decided to visit an open mic in October 2017. Since then, she’s performed in DC, Virginia, New York, and Texas. Poetry has opened the door to modeling and acting. She is also the co-founder of the DMV Renaissance Awards.
More info coming soon!
More info coming soon!